A foreboding beast of a rock.

Aegir’s the epitome of its namesake .

You would be forgiven for mistaking a protrusion on the side of the rock, as a face upon approach. History shows that it has been imagined countless times before. The demise of so many ships due to this fearsome rock gave rise to the name that is commonplace today.
One would happen upon this rock, after a very long time at sea, having seen nothing but ocean for days on end. It is said that the cabin fever drove crewmembers crazy with their longing to be shoreside again.

As the mist cleared and presented this land mass before them, silence would fill the air. Grown men, a shadow of their former selves, in utter dread looked on. They had heard the tales of Aegir. Any good seafarer had. Surely this wasn’t their time.
Captain’s would give coins to every sailor, so if they were captured they would have a gift for the gods.
Sailors had both loved and feared Aegir. For this giant of the sea had two very different sides.
An angry Aegir was a fierce god of the sea. He would sometimes appear simply to destroy ships. He had fingers like claws. and was well known for his jaws that were used to bite ships in half. His wife Ran was remembered for drowning unfortunate seafarers, whilst his nine daughters, were believed to have been responsible for the movement of the waves.
The plundering achieved wealth beyond measure. All treasure would be taken to Aegir’s magnificent hall beneath the ocean.
His great golden hall though, was the root of a very different Aegir. He was celebrated as a most jovial and gracious host. Highly regarded as the best brewer. He was responsible for many a grand feast, promising he was very popular amongst the gods.
Once inside the hall, fighting (a popular pastime) was not permitted. Ignoring these wishes would result in being banished from the hall forever. This was regarded as a serious punishment given that the cups in his great hall always remained full of the finest beer.
As a result Aegir was mostly portrayed as a kind, old man, the only giant who was nice to the Gods,

Take a look at the rock, you too will see the face within. If we didn’t know better, they would have us believe that it signifies the great Norse giant. Always remember how ruthless he could be.
A true master of the sea.
For every ship that sank, all were aware that the sailors would now be ‘dining in Aegir’s Hall’ 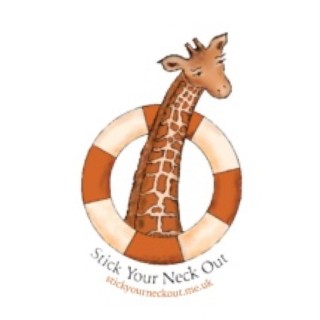 Stick your neck out is about having a go. It is the culmination of years of ideas but never having the confidence to do it. Finally somebody came into my life that taught me to stop hiding, stick my neck out and never be afraid to have a go.